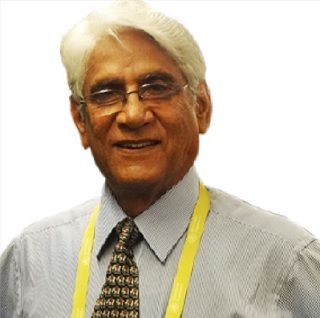 Rear Admiral Purushottam Dutt Sharma, AVSM, NM, IN (Retd) is the President & Founder of the Rashtriya Life Saving Society (India). Along with Mrs. Kavita Sharma, his wife, he has steered RLSS(I) with commitment during the last 20 years to its current status of being a branch of Royal Life Saving Society (Commonwealth) and a full member of the International Life Saving Federation, where he held the post of Vice President and President of ILS Asia Pacific Region from 2012 to 2016.

Both Admiral and Mrs. Sharma shifted to Pune in 1997 and founded the Rashtriya Life Saving Society (India) [RLSS(I)] in August 1998 to promote awareness in lifesaving, first aid, and road safety.

After staff tenures at the Naval Headquarters and the Directorate General NCC, in Flag Rank, he took premature retirement in 1993 and devoted the next four years to “Adventure Tourism” in Rajasthan, Himachal Pradesh, and Uttar Pradesh introducing some innovative concepts in camping and adventure sports. As a Naval Aviator, he commanded Ships and Establishments including INAS 300, the premier fighter squadron of the Indian Navy.

He is an invited speaker and conducts training workshops and seminars in “Safer Living”, “Community Education in First Aid & Lifesaving” and “Safety”.

Your ticket for the: Rear Admiral P.D. Sharma, AVSM, NM