Meet Real Life Heroes: A Lifesaver Son to The Rescue

Abhijeet Bhattarcharya, a dedicated lifesaver and  trainer was faced with a most unenviable situation.  His father was sick with Covid19, Oxygen level were down to 78 and his condition deteriorating.  No ICU beds, no ventilators, no oxygen, no doctors and no was money available to pay for space in a Covid hotel. When I asked him if I could help with some money, he said that he would look after his father himself with the skills, knowledge and expertise he has acquired as a trainer with the Rashtriya Life Saving Society (India). Along with his father, he also began to attend to four aged neighbors with similar symptoms. 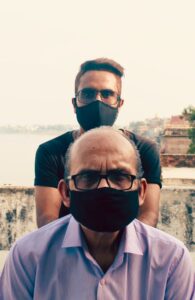 Over the next two weeks he put his father on a strict diet, routine of steam inhalation, saline gargle, deep breathing and prayers.  Combined, all these helped and he proudly informed me that his father had recovered and tested “Negative”. The same was the case with his aged neighbors.

In my opinion, whatever Abhijeet did must have helped but what would have contributed most to his father’s recovery was the fact that he had help and assurance from a doting son.  This made him fight more strongly for his life. On Abhijeet’s part was his confidence as a Master Lifesaving Skills trainer and the belief that he was going to get his father well.

Remember the more lifesavers we have, the more Surakshit Bharat we shall attain.

Your ticket for the: Meet Real Life Heroes: A Lifesaver Son to The Rescue

Meet Real Life Heroes: A Lifesaver Son to The Rescue